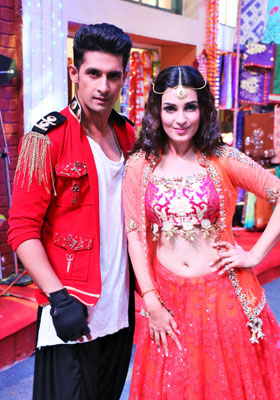 Zee TV's popular primetime drama Jamai Raja completed a glorious run of 600 episodes. Soon after its launch in July 2014, the show took the nation by storm with its unique depiction of the saas- jamai relationship. With its unconventional concept that defied television stereotypes, Jamai Raja soon became one of the most loved soaps on television and even a slot leader. This major milestone called for a grand celebration and a cake-cutting on the sets by the cast and crew.
Co-produced by Ashvini Yardi and Meenakshi Sagar, the show took off by introducing its first male protagonist Sid Khurana (played by Ravi Dubey) who took it upon himself to repair the estranged relationship between his wife Roshni (played by Nia Sharma) and her mother - the fiercely independent, tough-as-nails, businesswoman Durga Devi (played by Achint Kaur). Jamai Raja made the affable and charming Sid everyone's most wanted son-in-law and redefined the way a saas is portrayed on Indian television. People were in awe of the femme fatale DD who was smart, well-maintained, authoritative, strong, sexy and glamorous in her trademark chiffon sarees and sleeveless blouses - a major departure from either the bechaari saas or the scheming saas stereotypes.
The show recently took a 20 Â year leap and introduced a major twist in which Roshni and Sid die, handing over their son to their nanny, who runs away with him. Â The son Satya (also played by Ravi Dubey) Â grows up in a basti and is rough around the edges as a result of his upbringing. The current track of the show sees Satya in love with Mahi (played by Shiney Doshi), the heiress of a large empire. Aware of the ulterior motives of Payal, Mahi's stepmother (played by Mouli Ganguly) who only wants her property, Satya vows to marry her and protect her from being financially exploited by her own family.
Ravi Dubey who is currently down with Dengue could not be a part of the celebrations on the sets. He shared, '"t is really a proud moment for each one of us who has ever been associated with the show. When we started shooting, we never imagined that we would cross such a big milestone but today, it gives me immense pleasure to have worked on Jamai Raja since day one. The show is a trendsetter and a game changer. It is the first show to have focused strongly on its male lead in a domain where female protagonists rule the roost. A lot of hard work and positivity has gone into making the show such a huge success and I will always be thankful to the producers, ZEE TV and our audiences. I have worked in the industry for almost 12 years but the last 2 years as Jamai Raja have been incomparable. I have got so much love from across the globe. I am truly humbled and can't express enough gratitude."
Shiny Doshi added, 'I joined this fabulous team of Jamai Raja a month ago but the journey so far has been amazing. I feel honoured to be a part of this team that believes in taking the show from one milestone to the next. God willing, we will complete 1000 episodes of Jamai Raja.'

Eminent actor Mouli Ganguly who plays Payal, Mahi's step-mother shared, 'The show has completed a glorious run of 600 episodes only because of the constant love and support of the audiences. I was not a part of the initial Jamai Raja family but joined them three months ago. It feels great to be associated with such a Â show. The crew and cast is warm and welcoming and hope the audience continues to shower their love on us.'
Tune-in to Jamai Raja only on Zee TV!
Back
Tweets by @ZEETVAmericas