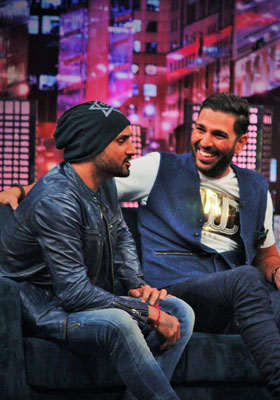 After two cracker Grand Premiere episodes last weekend with the kings of Bollywood Amitabh Bachchan and Shatrughan Sinha and the multi-talented Karan Johar and Farah Khan, ZEE TV is all set to entertain you again with Yaaron Ki Baraat. The show that puts celebrity friendships to test through a series of fun challenges and tasks, will see two best friends from the world of sports - ace cricketers Harbhajan Singh and Yuvraj Singh in a light hearted chat with hosts Riteish Deshmukh and Sajid Khan at 8:30PM ET | 8:00 PM PT. Get ready for a riot of giggles, and truckload of drama as the two star cricketers reveal how they met, grew as sportsmen and have been best of friends since.

Taking the style and cool quotient a notch higher, Yuvraj and Harbhajan entered on dirt bikes with girls swaying around them to peppy numbers. When asked by the hosts on how and when they met for the first time, Yuvraj described meeting Harbhajan for the first time at the Kapil Dev sports academy when he was barely 13. He went on to add that it was he who noticed a lanky fellow with a turban running on the field 'Mujhey laga ki sirf knicker bhag rahi hai, knicker me koi nahi dikha tha'. Bhajji, on the other hand, remembers having frowned at this bade baap ka bigda hua ladka until the two finally got to know each other a little better The two have been the thickest of friends since then and have bonded over food, gadgets and of course, girls.

Both Harbhajan and Yuvi have a huge female fan following and several hearts were broken when the former tied the knot with actor Geeta Basra and the latter got engaged to the pretty Hazel Keech. Recounting the days when the two had just started playing internationally and had begun getting noticed by fans of the opposite sex, Yuvi remembered an incident where the two were in a pub and basking in all the attention and adulation. There were some young girls partying there as well and one amongst them walked up to bhajji and in a stylish accent told him that it was rose day and requested him for a rose. As English was definitely not a strong point for Bhajji back then, he heard it as 'Can I have a blouse from you?'. Bhajji in a fix turned around and asked yuvi, 'Bhai, bandi blouse maang rahi hai' to which Yuvi replied 'Theek se pooch'! A confused Bhajji then turned around and asked the girl if she wanted a blouse and never heard from her again!

Yuvi who was on a roll to take his best friend Bhajji's case also recounted a similar incident from their training academy days. A delegation from abroad had once visited them and were interacting with the kids asking them their name and the place they were from. With his English being weak, Harbhajan overheard this and memorised it in the order of name followed by place...However, by the time it was Harbhajan's turn they flipped the order. But as the answer was memorized in the previous order by Bhajji, he didn't realise it and blurted out Jalandhar for his name and Harbhajan Singh for the place!
Watch Yuvraj Singh and Harbhajan Singh, spill the beans on each other, share some dressing room secrets, take on fun challenges and compatibility checks on Yaaron Ki Baraat at 8:30PM ET | 8:00 PM PT, only on ZEE TV!
Back
Tweets by @ZEETVAmericas