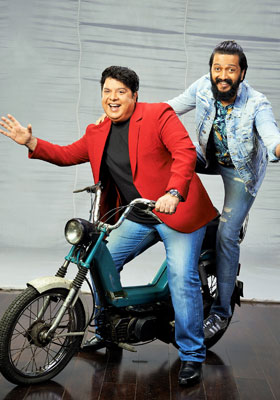 "Hosting Amitabh and Shatrugan Was like Writing Board Exams All Over again!"

1. Tell us about your experience while shooting for the first episode?

Sajid: The concept of ZEE TV's Yaaron ki Baraat is very different from anything so far seen on television. For the first time, celebrity best friends will come together on a fun-filled chat show to put their friendship to test through a series of fun challenges and tasks. So, for our first episode, we knew everything about the flow - the entry of the Â legends, the show flow, the script and every small detail about the D-Day. But when the legends came on stage, we were speechless and nervous, there were butterflies in our stomach! It felt like we were giving our board exams again where we went blank when the question paper arrived despite knowing everything. It was, indeed, a historic moment to have the two legendary stalwarts for our grand premiere episode.

Riteish: When the concept of the show was to celebrate friendships of the stars, the first names which came to my mind were the legendary best friends - Amitabh Bachchan and Shatrughan Sinha. So Sajid and I decided to approach them personally and Â we went to meet Them. Both instantly agreed, which actually was quite unbelievable for us as they hadn't shared screen space for nearly 35 years. Needless to say, we were a bundle of nerves when they finally came to shoot the episode with us.

2. It is a saying that, "Two female actors cannot be best friends". Will Yaaron Ki Baraat prove it wrong?

Both: People believe that friendships don't exist in the film industry, which is a complete myth. Furthermore, people believe that two heroines, especially, can never be friends. This is probably because friendships between any two male actors are written about a little more in the media. Yaaron ki Baraat will clearly prove this wrong as there are going to be many female actors who will come as guests with their best friends from the industry.

3. Will we see rival celebrity friends reunite on this show?

Sajid: Many people will walk in and out of your life, but only true friends will leave footprints in your heart. Friends fight too and there are ego clashes. But, if they are your true friends, they are just a call away. Even I have had ups and downs in my relationships with my best friends but it's all about just picking up the phone and sorting things out. Well, the motive of Yaaron Ki Baraat is not to bring back or re-unite friends. The show is about celebrating friendships and we will try and get celebrity friends to spill the beans on each other. Some of these friendships are written about in the media and some unknown. Our attempt will be to give one fun-filled hours of entertainment and also a sneak peek into Â the friendships of their favourite stars.

4. Who is the target audience of the show?

Riteish: The whole family can sit and get their weekend dose of entertainment. Each member of the family will connect to it. There will be nostalgia for parents, entertainment and friendship-goals for youngsters and fun moments where the entire family can sit back and enjoy!

5. What is your view on Friendships? Tell us some qualities about your best friend Riteish?

Sajid: Brothers and sisters are chosen by God and are written in your destiny, but friends can be chosen. It is a selfless relation, where there is only give and take of emotions, joy and sorrow but the crucial part is standing by each other through thick & thin. Riteish has been there for me throughout these years. He is a part of my family now. He is the most decent yet mischievous person I have come to know. I can say with great pride that he is a 'Yaaron ka Yaar.'

6. Tell us something about Sajid as your best friend?

Riteish: When I was a newbie in the industry, Sajid was well-established as a great host and had a chat show as well. It was very humble of him at that time, in 2001, to invite me on his chat show. I connected with him the very first time I met. Sajid is a friend who is selfless and rare, who does not think much when it comes to friendship and is willing to go to any extent for the other person. He doesn't understand when someone has wronged him. Such friends are a rare find and I am really grateful that Sajid is my friend.

7. What are your views on the Uri attacks and the following directive for Pakistani actors to return to their country?

Riteish: I salute India's response to the Uri attack with surgical strikes and feel a nation should respond to attacks. It is always India first. There is no compromise on that. After Uri attack, whatever stance our Army and Prime Minister took, I support and salute it. Every person has a right to Â express his or her opinion in the country but if the issue of terrorism can be solved by cutting off ties, I support it. If tomorrow, whatever relationships are there, be it Indo-Pak cricket matches, films or trade - if more pressure can be put by cutting them off to address and tackle terrorism, we will support it.

Sajid: The truth is, we are at a state of war and we are proud Indians. We have to respect our nation first. Our nation comes first. So if Pakistani actors have to go back, they should go back. I am with my country, like any other Indian. That's all I have to say!