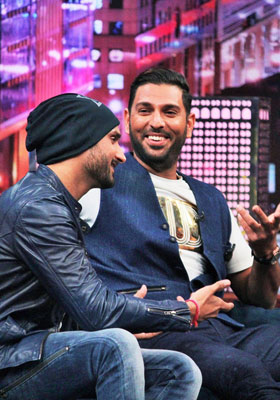 They've flicked towels from their rooms in 5 star hotels. They've gate-crashed weddings at the Maharani Club of Patiala by simply joining a bunch of dancing baraatis, playfully holding up a kid or two and making a beeline straight to the ice cream counter as "that's the first to get over at shaadis". These aren't the antics of just about any average mischievous youngsters but India's iconic Cricket heroes - Yuvraaj Singh and his partner in crime, Harbhajan Singh. In a candid chat with hosts Riteish Deshmukh and Sajid Khan, the cricket superstars will be seen making many more such cheeky confessions in a rare appearance on Zee TV's new chat show celebrating star friendships - Yaaron Ki Baraat at 8:30PM ET | 8:00 PM PT


Having entered in full swag on dirt bikes with hot babes dancing all around them, the duo took a walk down memory lane, recounting how they first met at a Sector 16 ground in Chandigarh when Harbhajan was training at Kapil Dev's Bowling Academy. "Sukhi hui dandi par jaise knicker chadhaayi ho" is Yuvraaj's description of his first impression of India's 'turbanator'. Bhajji, on the other hand, remembers having frowned at this bade baap ka bigda hua ladka until the two finally got to know each other a little better.

What followed was a lively chat that had the two reveal how they met their respective partners, Bhajji waxing eloquent on the joys of fatherhood and giving Yuvraaj tips as he gets set to tie the knot, plenty of leg-pulling between the two, pol khol moments and surprise visits by some of their oldest friends. One such chaddi buddy of Bhajji spoke of this one time when the cricket star and his bunch of friends were driving on a highway in Punjab and a bus just wouldn't let them overtake. Despite multiple attempts to overtake from either side when Bhajji couldn't race past the bus, Bhajji saw red and defiantly stuck his arm up at the driver through the window. At the next toll naka where they had to slow down and halt, the bus driver got off the bus with a bunch of hulkish looking companions with baseball bats in their hands. Banging belligerently on their car window, the bus driver and his comrades clearly seemed to want to settle the score with Bhajji and friends. It was Bhajji's presence of mind that saved the situation - He quickly diffused their temper, saying "Bhai sahab, aap galat samjhe. Main toh bass apni watch adjust karra tha!" While they didn't seem too convinced with this explanation, they calmed down and left even as Bhajji winked and high-fived his buddies!

In what turned out to be an evening of complete light-hearted fun and entertainment, Â hosts Riteish and Sajid got the cricket stars to play fun games that tested their compatibility as friends, asked them questions that brought out their mischievous sides and even had them interacting with some of their biggest fans.